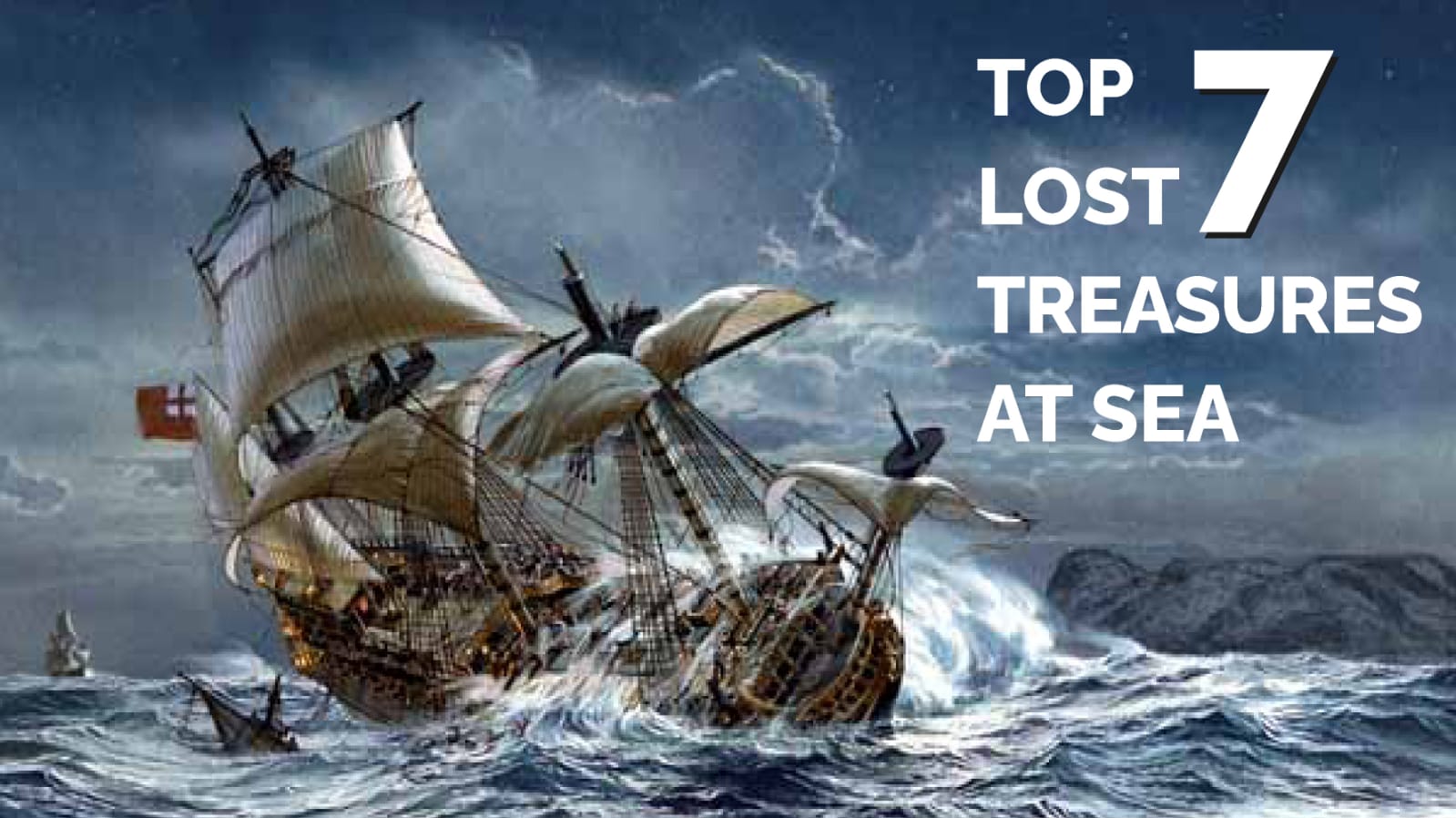 What do you think about when you hear the word treasure? A description of a loved one? A relic in a cave destined to be disturbed by Dr. Jones or The Lady Croft? A huge pile of gold crested by a sleeping Dragon? A chest full of doubloons hidden in a cave? All good answers, and all technically correct.  OK, maybe not the dragon one, but you know what I mean…

While it would be nigh on impossible to decipher what the most common form of “treasure” is, it would be hard to argue that shipwrecks would not be up there at the top. If not in frequency then certainly in material value, cargo ships, Royal transports, civilian and military vessels; all paint a rich silhouette on the horizon.

Although military skirmishes and pirates are responsible for, I’m sure, a great number of the wrecks at the bottom of the ocean I’m almost certain we can also attribute more than a few to Neptune, Poseidon or whomever else you believe holds influence over the seas themselves.

I’ve compiled a list of some of the most valuable sunken treasures, some of which are still, allegedly, out there today…

On the 5th of October 1804, during the Battle of Cape Santa Maria, the Spanish frigate Nuestra Señora de las Mercedes was sunk by the British. At the time Spain and England were, reportedly, at peace, but, as I’m sure we all know, the rules are sometimes different on the high seas. The Spanish flotilla was intercepted by a Royal Navy task force that demanded she turn around and go to a British port for inspection. The Mercedes,  though severely outgunned and outnumbered, would not comply as the Captain was under the impression they were at peace. Not complying with the demands resulted in the HMS Amphion firing a single shot which hit the Mercedes’ powder magazine, instantly vaporizing the ship and killing almost the entire 250 person crew. She was carrying around 14.5 tons of gold and silver coins (as all Spanish ships did at the time) the equivalent of $500 Million in today’s market.

The Blessing of Burntisland was a wooden ferry that would cross the dangerous Firth of Forth in Scotland. This ship sank during a storm on the 10th of July 1633 carrying a large amount of royal treasure. Its treasure still remains unfound and it was reportedly carrying a hefty 20 carts of jewels along with 4 to 5 tons of gold and silver. The equivalent in US dollars today is estimated at $738 million. At the time, King Charles blamed the sinking of the ship on witches who were ultimately put on trial and executed. No, seriously.

During a hurricane in September of 1857, the 280-foot steamer SS Central America or more colloquially known as the “Ship of Gold” sank between Central American and the East Coast of the US.

On a voyage from Panama to New York City she was carrying 30,000 pounds of Gold that had been prospected during the California Gold Rush. After a brief stop in Havana she was caught in a category 2 hurricane. The SS Central America was beaten for days by high wind and rough seas. Her eventual downfall came from a broken seal on the paddle wheel. Water poured in and though attempts were made by passengers and crew to bucket out the water but there was no stopping the intake. When the water hit the boilers that was it, she was losing power to the bilge pumps, fundamentally dead in the water. Other ships spotted the sinking vessel and were able to save 153 passengers but, sadly, 425 people were killed.

The price of gold that was lost at the time was US$8 Million in 1857 the modern day equivalent of $765 Million. This came at a trying time in US history as there had been an economic downturn and the gold was meant to help New York’s Banks and the ship’s loss contributed to the panic of 1857.

The Merchant Royal holds the record of being one of the most valuable wrecks of all time. The English Merchant Ship had spent two years in the West Indies trading with Spanish Colonies amassing substantial wealth. During her voyage home to England she stopped in a port at Cadiz where she was reportedly leaking very badly. It was at that point another ship that was due to leave the port with the wages of 30,000 soldiers caught on fire. The Merchant Royal’s Captain, seeing an opportunity to make a little more money off the voyage, offered his ship to carry the soldiers’ wages to Antwerp on his way to England. The extra treasure was the straw that broke the camel’s back. Off Land’s End and encountering rough weather, the bilge failed which ultimately doomed the floating treasure chest on the 23rd of September 1641.

She was holding at least 100,000 pounds of gold, 400 bars of silver, and nearly 500,000 pieces of eight. All said and done the modern equivalent would be $1.5 Billion in today’s money. The Ship remains unfound.

The RMS Republic was a steam-powered ocean liner built in 1903 which had a successful career till her sinking in 1909. Her long passages varied widely from Liverpool to Boston and eventually to New York and the Mediterranean. She was a luxurious ocean liner and her passengers were some of the wealthiest people alive at the time, giving it the name ‘The Millionaire’s Ship’.

In the early morning of January the 23rd 1909 off the coast of Nantucket on her voyage from New York City to the Mediterranean she encountered a thick fog. Taking the necessary precautions she signaled repeatedly as she steamed through the outbound shipping lane. Suddenly, at 5:47am another whistle was heard, the RMS Republic engines were ordered “full reverse: and the helm was put “hard to port”. It was at this moment that another Ocean Liner, the SS Florida, came steaming out of the fog crashing into Republic amidships on her portside. Quickly the Republic started to take on water eventually flooding the engine and boiler rooms.

Like the Titanic she did not have enough lifeboats for the passengers and crew but unlike the Titanic she was still in a relatively high traffic area and other ships came to her rescue. In reports she was carrying 3 Million US gold Double Eagles for the payroll for the US Navy’s Great White Fleet. In today’s dollar value it would be more than $1 Billion. She now lies 50 miles south of Nantucket at a depth of 270 feet.

The Flagship of the Spanish Treasure Fleet, The San José, a 64-gun, three masted galleon sank in battle south of Colombia in 1708. On a voyage from Panama to Colombia she sailed in a fleet of 3 Spanish warships and 14 merchant vessels when she encountered a British Squadron. This was known as Wager’s Action. During the battle that ensued the powder magazine of the San José detonated, instantly destroying the ship and all 589 people on board.

She had collected riches from South American colonies to help finance the Spanish king’s war. It is unknown to what extent she was laden with treasure but it is estimated she had the equivalent of $17 Billion in gold, silver and emeralds. She was discovered in November 2015 by the Colombian Navy and remains a state secret to this day.

On the first of March 1694 a severe storm cast the HMS Sussex asunder off the coast of Gibraltar. She was an 80-gun third-rate ship of the line for the Royal Navy and with such armaments there was concern on the weight distribution of a two deck warship. Though we will not know the true cause of the sinking it is estimated that she sank with 10 tons of gold coins, the equivalent of $500 million. In the end the storm of Gibraltar claimed 13 ships and caused over 1,200 casualties. The Sussex still remains one of the worst disasters in the history of the Royal Navy.

Earlier this year, the UN estimated that there were at least 3 million ‘shipwrecks’ spread across the ocean floor. Not all as exciting as the ones I’ve written about today, but from downed dinghies to defeated battleships and everything in between, it’s down there, somewhere.

Why are so many left down there? You may ask. Well, apart from the fact that some are just beyond the scope of our capabilities to reach or retrieve, there is actually a silver lining. It turns out that man made structures on the sea bed often attract marine life and plants. Some even become full blown reefs.The technique has actually been used to bring life back to fishing waters or create new fishing spots because it’s so effective. I guess in its own weird and roundabout way, this is just another example of how the sea adapts and overcomes, even for our mistakes.